How I Wrote My Novel Using Scrivener

A few writers have asked if I think they should use Scrivener — a word processing program and management system designed for writers — so I thought I’d tell you how I used it.

Scrivener helped me organize my scenes and sections (my novel doesn’t have chapters) and it was very helpful.

I didn’t start with Scrivener, though. I wrote my first draft by hand, and then I transcribed it into Microsoft Word. I wrote about 1000 words per day, and I transcribed as I went. I made light edits and changes as I transcribed my messy handwriting into the document — other than those slight changes, I did not edit my first draft. I wrote forward, without re-reading, telling myself I could fix the problems later. I think about my handwritten pages as the first draft, and that rough Word doc as a second draft.

When I finished transcribing my final scene into Word, I printed it all out, and read the novel for the first time. It was MESSY. I made notes on that manuscript by hand. Then I opened a new Scrivener document.

At that stage, I began writing the book all over again. I rewrote it and re-visioned it, scene by scene, 1000 words at a time. Most of the time I wrote directly into in Scrivener; sometimes I’d write by hand and then transcribe it. I wrote the book from scratch to keep the voice unified and fresh.

In Scrivener, I named my scenes with short descriptive phrases (never numbers) so I could recognize them at a glance and move them around easily. Scrivener makes this part really simple — you can see your entire novel at a glance, scene by scene.

It was in that Scrivener draft that I could group my scenes into sections — I chose the months of the year to delineate those sections. In Scrivener, the sections worked like folders — I filed all of the scenes into the appropriate section, and kept the folders open, so I could see everything. 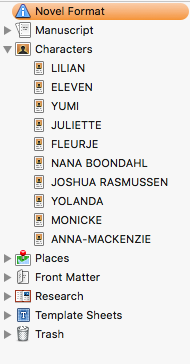 I created folders with photos, birthdays, Myers-Briggs profiles, and other character details in the handy character folders that Scrivener provides. That made it easy to double-check everyone’s astrological sign when I needed to align scenes with the moon phases, etc.

When I came to the end of the Scrivener draft, I printed it out and read it again. I made notes on that manuscript, by hand.

Then I went back to Scrivener to rewrite and revise, within the scenes and sections I had set up.

When it came time to do really granular editing and revision, I was so grateful for Scrivener! It was so much easier than scrolling and scrolling through a Word doc, or using CTRL+F to find a scene.

Scrivener has a good tutorial mode that teaches you how to get started. And there are heaps of great YouTube tutorials by writers who show you how to use Scrivener and set it up just the way you want it, if you have questions about compiling your manuscript, or adjusting the settings, etc. It’s a robust program — I’m sure I didn’t use it to its full potential. Still, I think it was worth it.

It does require a bit of a learning curve, but once you get the hang of it, it’s easy. For instance, my eleven-year-old niece is currently using Scrivener to write her novel, and she loves it.

Have you tried Scrivener yet? Tell me about how you write and organize your projects in the comments!

By Sarah Selecky
Under Writing Tutorials
3 min read
WOO! Practicing the future together.
It’s finally here! The first, the original.
Like

Hi Ann! I didn't move many of the scenes around, actually - I tried to follow Ann Patchett's advice (in her piece, The Getaway Car) and wrote the scenes in the order that a reader would read them, to help me get my tension and drama right. What I did find was that first draft had many, many gaps. Entire scenes were missing (weirdly, I thought I'd written them, but hadn't). So I wrote Draft 2 into Scrivener, and began the "new" organization there, as you describe. Following drafts had smaller scene movements (to make the timeline fit) and I found that I could make those movements within the same Scrivener project. It felt flexible to me -- but I understand your impulse to scrap the first draft organization and build it anew in Draft 2. Check in with us if you can, and let me know what you decide to do for your second draft!
Read more
Read less
Like
Reply almost 4 years ago
Linda

Thanks for sharing, Sarah. My favourite tool in Scrivener is the 'Target' tool. Go into Project, select 'Targets', and then set up word count first for the entire project, and then for each session. When you hit that 1000 words you'll get a notification for nap time. :) I wonder how many years you spent on RSL from conception to birth? I'm sure you've discussed this on another blog but I can't find it. Peace and Love. lm
Read more
Read less
Like
Reply about 4 years ago
Donna McKamy

I got Scrivener a few years ago and never took time to learn it. Even subscribed to the weekly tips. I’ll be taking the time now after Sarah’s comments. Thank you?
Read more
Read less
Like
Reply about 4 years ago
Kristin

LOVE Scrivener. I never use it to its full capacity, either, but I've found that even just using it in a basic way is hugely helpful for organizing scenes and doing scene revision. For my previous novel, I used it from the beginning and wrote/revised/organized everything directly in Scrivener. For my current novel, I'm writing the draft in Word and transferring each section over to Scrivener as I finish writing each one. I don't know why I'm drawn to Word this time around, but I'm rolling with it. It's like my brain wants to see the larger document in one place, then each scene divided up by chapter in another place. Either way, I always recommend Scrivener. It's such a robust program! There are so many possibilities for how to use it.
Read more
Read less
Like
Reply about 4 years ago
Diane

I love Scrivener for editing. I use descriptive scene names, as well. I definitely recommend the tutorial, but then it's pretty easy to write and edit within Scrivener itself. It helps me "see" my whole novel as it takes shape. I didn't write my first draft in Scrivener, but I am writing my first draft of another novel, in Scrivener. I'll see how that goes!
Read more
Read less
Like
Reply about 4 years ago
Sarah Selecky

Oh my goodness Linda -- the TARGET tool? I didn't even know about it! Thank you for sharing it here -- definitely using it for the next project. Years spent on RSL from conception to birth -- I haven't written a post about this, but now I will! Short answer: 5 years. But there's an asterisk on that time... depends what you count as conception. :)
Read more
Read less
Like
Reply about 4 years ago
Sarah Selecky

Hi Kristin! There's something about compiling everything in Word that I wanted for myself -- to know that it's all coming together as one doc? I'm still not sure. But isn't there also something nice about having a chance to do a light edit as you transcribe the sections into Scrivener, piece by piece?
Read more
Read less
Like
Reply about 4 years ago
Sarah Selecky

It's so good, Donna -- my advice is to just start small. Learn a few things, but try not to get bogged down by having to understand everything before you get started. It's such a robust program! A little goes a long, long way.
Read more
Read less
Like
Reply about 4 years ago
Ann Cavlovic

I'm really finding scrivener to be so useful for a first draft, as it makes it so much easier to weave scenes and 'stubs' (as i call them) together into chapters. But I'm curious, once you had a full draft that was compiled and printed out in Word, did you stick to the same scene organization when doing another draft (and move stuff around as needed)? I almost feel like when it's time for draft 2 I should start a new Scrivener project so that I"m free of the old organization, if need be.
Read more
Read less
Like
Reply about 4 years ago
Cindy Bahl

I bought Scrivener a few years ago. Tried to use it. Then got overwhelmed and gave up. I continue to hear wonderful things about using it, how it can change your writing and, well, change your world as a writer. Your post on it has made me reconsider giving it another try. I admit that I got frustrated when I couldn't get it to sync properly between desktop and mobile. It kept having issues. And I have heard others having the same type of issue. But maybe I should only use it when I'm on the desktop. Instead of making it do so much more. I mean, any writing I do mobile I can transfer over later that night to desktop. Right? Do you have any resources that an ADD brain like mine might find useful in learning how to use it? And use it successfully? Any and all suggestions would be greatly appreciated. Thank you!
Read more
Read less
Like
Reply about 1 year ago