Why you should write something subversive and hilarious. 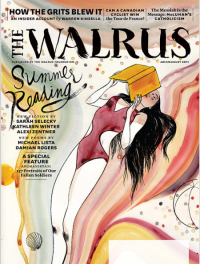 This month, in the summer fiction issue of The Walrus, I published the first piece of fiction I've written since This Cake came out last year. When I was given the story assignment, I admit: I was - well - scared. I wanted it to be good. There was a voice inside my head that kept telling me I wasn't doing it right.  "That idea sucks," it said. "Nope, that one sucks too. Listen: this is a national magazine. Do not mess this up!"

It felt impossible to write under that kind of pressure. You know what I'm talking about.

Thankfully, it was an assignment (so there was accountability), with a deadline (I only had six weeks - no time to waste). But the best part about the assignment - the part that made it possible to write in the face of all of that resistance - was that there were several creative restrictions. Each author in the issue was given five "rules" by another author. In other words, I had been given story prompts.

Specifically, it was one of Kathleen Winter's "rules" that saved me from myself:

The story should have at least one paragraph that contains something the author personally finds subversive and hilarious.

Why was this so important?

Because it gave me permission to write something ridiculous, inappropriate, terrible, or otherwise WRONG.

It gave me the freedom to write a first draft.

This prompt is now my talisman. I am using it to write my next book. It feels so liberating to have something to say that always trumps the voice of your inner critic. It's different than just not paying attention to your inner critic - that works too, of course, if you're practiced. But to have something substantial to say back to the voice? Something that actually makes it shut up? That's invaluable.

I give this prompt to you now. You try it, and see what it does for your own writing.

By Sarah Selecky
Under Writing Advice
2 min read
Stop everything. Back up.
What to do when you're annoyed by your best work.
Like