Who are you writing for? Women’s fiction and the Inner Critic.

I’ve re-read Ursula K LeGuin’s Carrier Bag Theory of Fiction many times in the past two years for sustenance. In it, she proposes a non-patriarchal story model — story as a container, a thing that holds something else, rather than a hero leading the way. I tried to understand what she meant by practicing the theory through my writing. My practice taught me that I have much more to learn, and to unlearn.

“There is another world, and it is within this one.” — Paul Éluard

Is my book “women’s fiction”? I don’t know. It’s a book about women: that I know.

“Women’s fiction” is a marketing category. It’s an umbrella term that means that the stories appeal to women more than men. Think about that for a minute. What is that teaching us? What value does it place on the books women write, if the stories are relevant to women? Why is it okay with us that women’s stories are understood to be less significant — a sideshow — to the larger sphere of literature?

My book is coming out on April 24th. In this book bardo — the pause between writing it and releasing it — I feel excited and uneasy, like I’m on that amusement-park ride called the Scrambler, hanging on to the safety bar, laughing giddily one minute, sick and scared the next.

Male critics have been known to dislike stories about female friendship.

This novel is unlike anything I’ve written before, and yet it’s what I always wanted to write. I wrote with an ease that I haven’t felt since I was a teenager, and at the same time, I felt challenged in every scene I wrote.

This is a book that I wrote for myself, and for the women I know. I was challenged as I wrote it because I didn’t know if there would be space for a book like this.

The truth is, there’s a little male critic living inside me who’s saying this story is too crazy, too feminine, that there aren’t enough male characters in it for it to be taken seriously by anyone. It’s my inner critic, taking it up a level: now he’s wearing an expensive suit and bifocals, speaking in a deeper voice.

“At every turn, women are taught that how someone reacts to them does more to establish their goodness and worth than anything they themselves might feel.”
— Lili Loofbourow

Ugh. I thought I was over that! I thought I’d unlearned that habit of outsourcing my authority. I’ve trained for it: while writing, I’ve practiced the art of hearing the inner critic and disregarding it. Now, on the threshold of publication, I see that there’s whole other level to this training: the going public level.

While I was busy writing like nobody was watching, my inner critic shape-shifted, hoping that I’d pay attention more. It almost worked. He’s so SNEAKY!

I have two months left on this Scrambler ride before my novel is ready to share with you. During this time, I’ll be strengthening my personal sovereignty in the face of that bifocal-wearing critic in his grey suit.

For now, you can preorder Radiant Shimmering Light on Amazon, Indigo, or your local independent bookstore. Preordering it is very helpful to me — thank you. ♥

Here’s to our creative freedom and sovereignty...Happy Valentine’s Day!

(psst: I send out special things to my subscribers on February 14th — if you’re not on my list, you might want to get on it today at the sign-up box below.) 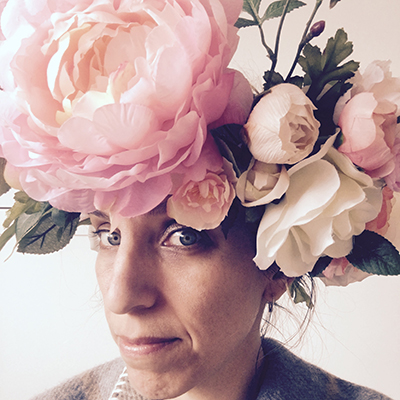 By Sarah Selecky
Under Newsworthy
4 min read
On sexual harassment in creative writing programs.
Why the new name?
Like

Wow. Thank you. Le Guin’s words and your own challenge me to a broader approach in the search for my woman’s voice.
Read more
Read less
Like
Reply almost 5 years ago
Stephen D. Forman

Wow-- I think silver foil will just glisten on that spectral cover of yours! I'm sure the similarity to your website's colorblend is strictly coincidental... or is it? Perhaps there's something to this particular metaphor that's bubbling up in your life at this moment in time, and revealing itself in both choices? (Or maybe I just have to read the book... you'll be heartened to know I'm pre-ordering it tonight.) Having read your Letter above, I find myself stirred to ask so many questions. This topic of "fiction" vs "women's fiction" came up in one the links you shared in your last Letter, and again last week in the Secret Library podcast (eg accidentally writing a "feminist" novel by subverting expectations of female characters). But before I continue, I'd like to read the articles you linked to this week (I've printed them for later). I always learn so much from you. I even learned the word bardo today. I am SO playing that the next time we play Scrabble : )
Read more
Read less
Like
Reply almost 5 years ago
Sandra Gulland

As always you are inspirational Sarah. I am looking forward to reading your book.
Read more
Read less
Like
Reply almost 5 years ago
Nancy Squires

Congrats! Take courage, the critic in the suit is a windbag. (And I love the roses :-)
Read more
Read less
Like
Reply almost 5 years ago
Margaret

Congratulations! From what you write about “Radiant Shimmering Light” I can’t wait to read it. Good luck with letting it out into the world.
Read more
Read less
Like
Reply almost 5 years ago
Stephen D. Forman

Oh my gosh, I'm so silly. This from the product description: "Lilian Quick...paints the colored light only she can see, but animal aura portraits are a niche market at best." /curious finding: the hardcover synopsis is different from the paperback version. Hmm, did you write 2 different books? One is enough of a challenge!
Read more
Read less
Like
Reply almost 5 years ago
Heather Davis

Can't wait to read it, especially after reading this. Picture your critic as a younger man, one who grew up reading Hunger Games and the Golden Compass. Not long ago, conventional wisdom said boys wouldn't read about girls and that is history!
Read more
Read less
Like
Reply almost 5 years ago