What will make your characters real?

What is REAL?” asked the Velveteen Rabbit one day. “Does it mean having things that buzz inside you and a stick-out handle?”

“Real isn't how you are made,” said the Skin Horse. “It's a thing that happens to you. When [someone] loves you for a long, long time, not just to play with, but REALLY loves you, then you become Real.”

“Does it hurt?” asked the Rabbit.

“Sometimes,” said the Skin Horse, for he was always truthful. “When you are Real you don't mind being hurt.”
—Margery Williams, The Velveteen Rabbit

The secret to writing a truly good character – a person who has real passions, flaws, judgments, obsessions and blind spots – involves a great deal of honesty. But not in the way you might expect.

Writing real character requires so much work, it’s easier to skip it and just write a story about stuff that happens. After all, you can always write scenes and have people walking around in them. That works. You just make up a name for your character and give her a description - a job, a wardrobe, a pet. You know, "details." 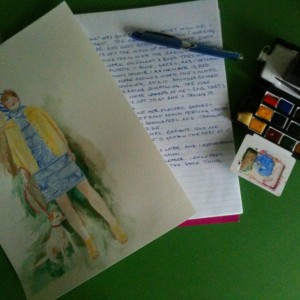 Character work is partly about the art of creating composites from a bed of real detail. That's when you take the way a cashier paints her nails and the way your mother walks her dog and the funny way your high school teacher pronounces the word "apricot" and put all of those things into one person and name her "Frenchie." Then you have what we call a character.

When you throw in a want/need and a secret – say, Frenchie had a son when she was 16, gave him up for adoption, and recently believes she found him working at a library in Whistler, BC – then you have drama. Done!

Except that Frenchie doesn't quite have the power to come alive off the page, yet. She has qualities and details, but she isn't real.

Writing character is not just about imagination and observation -- it's also a matter of love and respect. Writing real character, I'm afraid, requires advanced vulnerability. There are two levels to this.

Level One
If you're going to write honestly about composites created from some of the people in your life, you risk exposing their thoughts, conversations, mistakes, fears, and betrayals. What will they think of you if you write that? Will they recognize themselves? What will happen if they read this? Etc.

We’ve all been there at one time or another. But to take your character work to an even higher level, the secret is in Level Two:

Level Two
The things about yourself that you're most afraid to look at, name and explore – your judgments, your fears, your insights, your unmediated truenesses – these will be the strongest elements in your character work.

Therefore, it can be difficult to write real character. Especially if you don't like to be honest with yourself. Or if you’re just out of practice.

In order to write a real character, you have to be honest about who she really is. Then you must love and respect what she has to offer: imperfections included, ugliness included, contradictions included.

Writing great character is the transmission of those two streams – self and other – at the same time.

I love writing fiction because it lets me make things up. I can invent people and let them do things I would never, ever do. In this way, through writing character, I feel like I can escape myself and become someone else.

And it is escape! But it is also the opposite of escape.

1. What if your resistance to deep character work is because you're afraid of exposing other people in your life?

2. What if the thing that is holding you back is the fear of exposing too much of yourself?

3. What would happen if you wrote it anyway?

By Sarah Selecky
Under Writing Advice, Most Popular & Writing Tutorials
4 min read
How do you find your mentor?
In the spotlight: Lana Pesch
Like

Sarah, thanks for the reminder that writing real character requires vulnerability. Scary, but so true. I also love the Skin Horse quote that "When you are Real you don’t mind being hurt.” It hurts me to allow my characters to be hurt, but I must if they're to become real.
Read more
Read less
Like
Reply about 10 years ago
Lise

Yikes! This is me. I knew these things when I took Introducing The Story a year and a half ago (wow, has it been that long?) but this crystallizes it for me. Writing presents many challenges, but I think this is the toughest one for me. And I'm sure, the most rewarding once you face it!
Read more
Read less
Like
Reply about 10 years ago
Mary Nicholson

Sarah- one of my character inspirations...has his own Facebook page! I shrunk back in horror when I realized this- my fictional character has become so real I forgot that the "real" person exists! Lol! So yes, it is difficult to write authentically about characters, because we are always risking incredible vulnerability. But- I also think that we are compelled to tell stories, the best stories, that help us figure out life. So it is worth it.
Read more
Read less
Like
Reply about 10 years ago
Sarah Selecky

I know what you mean Brooke. I resist it all the time too. But then, when I'm being honest about what makes a character hurt when I write - it also feels strangely... good? Well, maybe not good. "Real" feels like the best way to describe the feeling.
Read more
Read less
Like
Reply about 10 years ago
Sarah Selecky

Hi Lise! Yes. For me, it is the most rewarding part. Hands down. I treat it as a long-term project - I understand that I'll never fully get past the challenge and its inherent toughness. Rather, it's become the most important part of my process... the very thing I love about writing.
Read more
Read less
Like
Reply about 10 years ago
Sarah Selecky

Mary, you're kidding! That's so funny. And I agree completely - it's worth it. It's the point, really. Anything less than doing this work feels like skipping out on why I'm a writer in the first place. The challenge itself is the compulsion to write.
Read more
Read less
Like
Reply about 10 years ago
Stephen D. Forman

Terrific post, Sarah! A few points really hit home for me-- for instance, would my brother recognize himself in the "intimidating, authoritarian" character I'm writing? It wouldn't be problematic if the characterization were more flattering...but this one isn't. Second, I know I've held back as both novelist and lyricist from exploring some of my darkest themes because I've been afraid of what others would say. As a happily well-adjusted man, wouldn't my family observe, "Oh my gosh, what would compel Stephen to write about murder and abuse? Why are his characters so violent and malevolent?" I'm afraid what it would say about ME... Third, ever since I studied the Character Chapter in SSM, I've felt like I couldn't write another character unless I completed one of those 15-page backstory practices first. It was both an exhilirating exercise, and paralyzing! It's like-- nothing's ever good enough anymore if I don't invest 20 hours of mental research first. But unless I'm flying non-stop to Brisbane Australia, when else do I have that kind of free time? So.. thanks, but help?
Read more
Read less
Like
Reply almost 10 years ago
Sarah Selecky

Hi Stephen! Thank you so much for your questions. Your second question is especially fascinating. So good, in fact, I'd like to answer in an upcoming newsletter. Is that okay with you? xo S
Read more
Read less
Like
Reply almost 10 years ago
Stephen D. Forman

Very, very helpful. Go deep and find yourself in your writing, unflinchingly. Good to be reminded to look in the mirror and find the unfamiliar in the famiilar. Writers are probably the only people who embrace the deeply flawed character, including oneself.
Read more
Read less
Like
Reply over 8 years ago
Grace

This is awesome! I'm a very young writer trying to get deeper with my characters and content. I'm just starting out with writing long-term. It's very difficult to make your characters real, but this, by far, was the most helpful character development advice I have ever read.
Read more
Read less
Like
Reply over 8 years ago
Cathy Monetti

The year before he passed I had the honor of meeting Pat Conroy at the South Carolina Book Festival. As he opened THE DEATH OF SANTINI to sign, I mustered up the courage to blurt out, "I'm writing a novel!" He raised his head, looked me in they eye, and with a smile that seemed to indicate I was the first fan he'd ever met who'd ever offered anything so wonderful, he said, "Shall I give you some advice?" Oh, yes. "To Cathy--" he wrote. "Write your book. Go deeper." I will never, ever forget Pat Conroy's kindness and his encouragement. Thank you, Sarah, for a lovely (and helpful) reminder.
Read more
Read less
Like
Reply almost 6 years ago