Shannon Alberta had a dilemma. A passionate advocate for cultural change, this Story Course grad and Story Intensive teacher was starting to achieve real success in her life as a fiction writer. 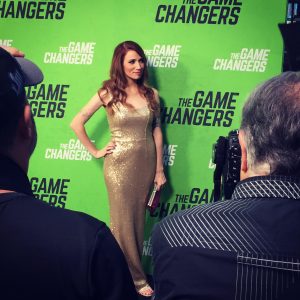 When she had the opportunity to work on the documentary The Game Changers, Shannon helped write and produce a story that is now changing the culture of food, disrupting old and outdated perspectives about strength, and making a significant difference in the climate crisis.

Read her piece below: it’s about trusting the craft of writing and story when you want to make a cultural change. (Writers with vision, take note.)

If you’re interested in sports and fitness, watch The Game Changers documentary this week. It’s available on Netflix.

Since I was a child, I’ve had two hungry goats inside me: an artist goat who just wants to tell stories and rub foreheads with humanity, and an activist goat who just wants to change the world and make other people rub foreheads with humanity. The problem is, both goats are rambunctious and always hungry. And there’s only so much pasture. I used to worry that feeding one meant starving the other. And it felt so horrible that it kept me mainly tending to my activist goat (because how could I let her starve while artist goat just wanted to tell “silly stories” that didn’t matter?).

But artist goat wouldn’t have it, and liked herself too much to be ignored. So she sprang across the acres in my mind, dazzling me with beautiful streaks of story, making it impossible not to acknowledge that she needed me too. So I started feeding her more. Instead of abandoning activist goat, I ensured that what attention and focus I offered her was truly the stuff that made her feel most alive. Everything else she had to say no to. And things were pretty great!

Then, I was given the opportunity to work on a documentary that had huge potential to change the world. My activist goat was so happy! There’d be so much nourishment for her over the next couple years. But of course, my artist goat was worried. Was she going to starve?

Spoiler alert: not even a bit. In fact, she’s more satiated than ever.

Because so many of the skills I acquired from my experiences in Sarah’s school were put to use as the co-producer and co-writer on this project.

For example, we’d be struggling to find the bridge of narration that would connect two scenes. How can we possibly get from a science segment on inflammation to Olympian Dotsie Bausch becoming the oldest person ever to go to the Olympics in her sport (let alone return with a medal). It felt impossible! 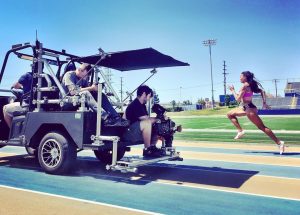 But that’s when I’d lean on the “Plot & Drift” lesson from the Story Course. I’d remind myself that it’s okay to trust the tendrils that connect two moments, however delicate. That we could trust that the audience would trust where we were going.

And that, when in doubt: go back to character. Because it is what moves the plot — yes, even in science-heavy documentaries! In fact, one of our writers, Mark Monroe (whose writing credits include: Icarus, Before The Flood, The Cove, Under The Gun, Fed Up) would always say the same thing when we ran up against story challenges: character, character, character. Whenever the script felt too cold, too distant, that was always the problem. We’d unknowingly let the science veer us too far from our protagonist’s journey. I couldn’t believe the universality of the Story Course lessons!

With the film now out in 190 countries and the impact being felt around the world, I plan to let my artist goat have her much-needed time in the pasture (and to be honest, activist goat sure could use a snooze). I have always understood the value of Sarah's lessons in the context of my fiction work. But I could never have predicted that they would also serve as little guideposts as we brought this documentary film to life.

Shannon Alberta is the co-producer and co-writer of The Game Changers. She is also a fiction writer who won first prize in the 2016 Lit POP Awards. Her stories have appeared in Joyland, The New Quarterly, Found Press, and Matrix Magazine. In 2014, she won first prize in the Eden Mills Writers' Festival literary contest. She is currently marinating the first draft of her novel in her desk drawer.

By Sarah Selecky
Under Guest Authors
5 min read
To the aspiring writer.
The Joy of Missing Out
Like