The floor, the typewriter, and the story.

Today is the penultimate feature in our special Little Bird Contest guest post series. The contest deadline is still two weeks away. There’s lots of time left for you to finish your piece and submit it to Esi Edugyan. Remember, you can submit your story anytime before May 4th. [Note: The 2017 Little Bird contest is now closed. You can read the winning stories here.]

In today’s feature, we talk to Jill Talbot, from Gabriola Island, British Columbia!

We first met Jill through her Little Bird submission in 2014. When Rebecca Lee picked her story as a runner up for the contest that year, we were delighted to learn that it was actually one of the first stories Jill had ever written! The following year, one of her stories placed again. You can find Jill Talbot’s stories in Little Bird Stories Vols. 4 and 5.

Since then, she’s continued to write and publish exciting and fearless new fiction. I love Jill’s interview for its honesty and humour. She reminds me how important it is for a writer to be courageous, and leave the comfort zone. Because, as we all know, that’s where the magic happens. Enjoy! 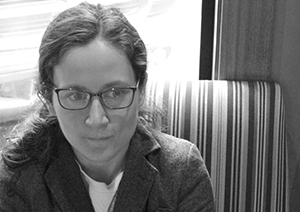 What led you to submitting to the Little Bird contest?

I remember lying on the floor with these bits of paper, arranging a story that was both mine and not mine. I remember it originally came from a previous scene that didn’t end up working, which I typed out using a typewriter in rehab because we weren’t allowed laptops. Now I would just use my notebook. Then, I liked the sound of the typewriter and feeling closer to the world — to the stories.

I don’t remember what would have drawn me to enter the contest. I in no way considered myself a writer. I had no MFA, no MA, no BA. Perhaps I knew I had a story. In a sense I miss the simplicity of that. Before I knew how to be ‘irreverent’. This probably isn’t very inspiring. But this is what I remember. The floor, the typewriter, and the story. By any account I have come a long way. And yet I miss the basics.

Did you know, after doing the Daily Prompt that day, that you had created something exceptional?

I don’t really remember that part. As soon as being exceptional even becomes an option, I have usually lost the story. And I am missing huge chunks of time. Until I am writing, this is generally the case.

“You own everything that happened to you. Tell your stories. If people wanted you to write warmly about them, they should have behaved better.” — Anne Lamott

What literary magazines (digital or paper) are you reading these days?

I read a lot of magazines. There are so many high quality works out there, but the one I look most forward to getting is subTerrain. I suit their style and therefore feel far less freakish when I get a new subby. I am also looking forward to my new Rattle subscription. Currently I am reading a copy of Granta that I found at a thrift store. Thrift stores often have great finds, as well as library discard piles. The New Yorker has great fiction and I get those from the library discard pile for 10 cents (25 cents in the city). If I start listing all others, I am afraid I will always feel I have left something out.

Why does writing feel important to you right now?

Writing this post has forced me to look back and reevaluate this question. It is so easy to get caught up in publications. But writing has felt important since that day because, truth be told, I can’t do anything else.

I heard on Girls (one of my favourite TV shows), Hannah say, “I want to write stories that make people feel less alone than I did. I want to make people laugh at the things in life that are painful.”

I have never been brave enough to say such a thing, dismissed it as cliché. In fact, the latest report on me states that I lack: insight, a willingness to be real, interests, motivation and responsibility. I found myself saying, “but I am a writer…” The significance of such a statement was surely lost on the person reporting on my personality. However, it certainly wasn’t lost on me. It may have been the first time I actually made the full-on declaration. My life has never followed the usual track. Romanticize this as you wish — there is a difference between being motivated by fire and becoming a pyromaniac.

As for the writing — the importance — I have given up on knowing why. Why is an exceptional question. I am hoping to go back to basics.

How has being a Little Bird Contest winner changed things for you?

I don’t believe that writing should offer hope — a clean ending — but it should offer truth. There is redemption in that — not in an ending, but in having a voice. Little Bird taught me there was something there. If hope is the thing with feathers as Emily Dickinson wrote, at times I feel like a plucked chicken. Maybe I have just answered the first question better. I entered because I didn’t yet know what it was to have anything to lose. Little Bird gave me that risk. Nevertheless I do miss the days when I completely forgot about submissions! If I told you how many submissions I currently have out, you may have a heart attack. But I obsess over each one. I guess that hope has its downside.

What’s next for you?

I have no idea. I write short stories, poetry, plays and creative nonfiction. I am still working on healing — the real work, generally speaking. Sometimes the writing doesn’t seem to be happening fast enough, often it seems to be happening too fast. Perhaps I don’t need a plan. Sometimes having a plan ensures that the opposite will happen. The more I swear off poetry, the more poetry I write. I certainly had no plan to enter Little Bird. I had no plan for anything else I have accomplished. I had the words. I had the hardwood floor. I certainly always had the stories.

I am more involved now with the local poetry scene, including mentoring a youth workshop. I want to rework an old novella and write a new play when I am in a place to do so. I received a lovely rejection letter the other day that told me not to lose heart. My tendency is to drive myself into a place where I can’t afford heart but also can’t afford not heart. Perhaps it’s time to wait for being able to afford heart. Be in the uneasiness of the unknown. I have a bulimic style of writing where I go through one thing after the other, just to not have to look at it. As true of any fatal flaw, it is largely to credit for any success I have had. However…

Long form is more appropriate for heart. I usually complain that it’s my lack of discipline or training that has me resisting going back to longer works. But I also often claim that I got this far without heart and if you wanted a post on what writing is all about, you should have asked someone else. I often claim that people with things to lose are foolish. I often claim that the story is in the fire. I am my own worst narrator.

That isn’t a very uplifting end so here is another piece of advice from George Saunders:

“Don't be afraid to be confused. Try to remain permanently confused. Anything is possible. Stay open, forever, so open it hurts, and then open up some more, until the day you die, world without end, amen.”

About Jill: Jill Talbot attended Simon Fraser University for psychology before pursuing her passion for writing. Jill’s writing has appeared in Geist, Rattle, The Puritan, The Tishman Review, Matrix, and subTerrain, was shortlisted for the Matrix Lit POP Award for fiction in 2015 and the Malahat Far Horizons Award for poetry in 2016. She had a staged reading of her play, God In Psych Ward Pajamas put on by Western Edge Theatre in 2015 and her play, If That Looking Glass Gets Broke was commended by the BBC in 2016. Jill lives on Gabriola Island, BC.

By Sarah Selecky
Under Guest Authors
8 min read
Write like a reader, and read like a writer.
Rosie is still one of my favourite characters.
Like