In the Spotlight: Paige Cooper

I met Paige Cooper at an epic writing workshop I led at Banff. Since then, she's dedicated herself to her craft with enviable passion and discipline. It's so affirming to watch what happens when a writer deeply commits to her practice! I feel fortunate to have worked with Paige, and it's been wonderful to watch her writing (and writing career) unfold. I've been waiting to feature her in a spotlight for a long time — I'm excited to finally introduce her to you.

Read her interview and excerpt below, and see for yourself why I dig her work so much. Her writing is stunning: the images burn with liquid heat, and her dialogue crackles; she moves her story forward in the same way lava creeps over the ground.

Also: "pearly laplets"? "When the light goes apricot"? "Brutalizing a raspberry"? This piece reminds me why I love words. You can really feel, reading this, the mastery that comes from writing practice. 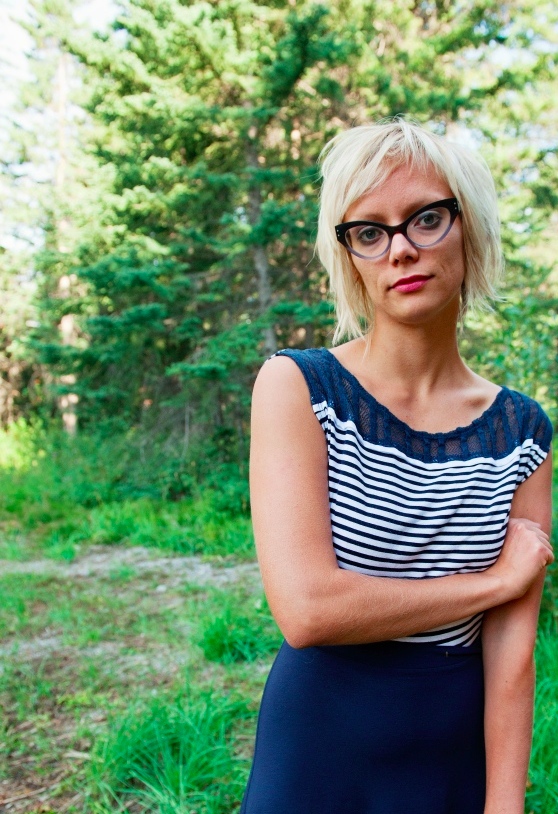 Paige Cooper's fiction has appeared or is forthcoming in The Fiddlehead, Briarpatch, and The Incongruous Quarterly. She holds a BFA from the University of British Columbia, and has participated in workshops at Bread Loaf and the Banff Centre. In 2012 she was writer-in-residence at NOASS Arts and Culture Project in Riga, Latvia. She works as a librarian at a record label in Montreal, and writes tiny lies as @paigesaracooper.

Door-locked solo. Plus a small group of incredible editors.

I'm a troll: all for habit and ritual, and guarding my best hours. I keep my mornings clear. I get up in the dark, light a taper, burn a fingernail of sage. Then it's either 8:45 and I have to book it to work, or it's the weekend and I can pour hot water into my dead tea leaves and start again. To avoid resistance, I usually decide on what I'll be working on the night before, as I'm falling asleep. Sometimes I change my alarm so that the label reads as an instruction: "SHE'S REALLY DAMN SATISFIED ON THAT BEACH" or "THE TWIG IS A FINGER OF ANTLER" so that the day's task is the first thing I see when I open my eyes.

Write through everything. Through the love affair, through the job hunt, through the trip to visit your childish and irritating granny. Allow that sometimes writing is four hours at the keyboard and sometimes writing is three words in your notebook on the sweaty sidewalk, and sometimes writing is wandering slackjawed through the Guggenheim then going for gin sours. With practice, this means that the morning after you've moved out of your ex's apartment, you can still write that western drug bust. Alternately, when the weather is magical and you're in love with your foster dog, then you can write the story about your lost home. Or, yeah, write it as it comes, sometimes it happens that way, too. Regardless, make sure you're tapping it, make sure you're connected, even when you'd rather just take the wine into the bath. Our job is to locate that place that most people spend their lives avoiding, enter it, and come back with a story. Then, we craft it.

Tell us about your experience with Story Is a State of Mind. How it has changed your relationship to writing?

Either I found SSM when I was at a crux, or it created the crux, I can't tell which. It was a catalyst. First, it established that writing is a practice, not a goal. Secondly, it taught me that the feeling of good writing is the feeling of being exposed. When I worked with her at Banff, Sarah taught us to go after the fear, the too-much, and to dwell in it. I do improv comedy as well, and my teacher there loves to say, "Steer for the sound of the guns." Trust your craft and instincts, but really live for the discomfort. Sarah entirely changed my relationship to writing, in that I stopped being afraid of it. This, in turn, forced me to change my life to support that relationship. So. Enter at your peril.

Tell us about the excerpt you're sharing today

I'm obsessed with adventure narratives, lately. I'm often accused by my merciless, canny, psychic group of editors that 'nothing happens.' So this year I've been re-examining drafts – is this ambitious enough? What is the most awesome thing that could happen? (Usually by 'most awesome' I mean 'worst.') I've been following my imagination as much as my emotional instincts, which is perhaps why this one is about Tarzan's wife turned mad scientist in a dilapidated Croatian castle. The other half of it is that this year when my fiction group got together for our annual meeting, we spent an evening analyzing each other's themes and pinning down our obsessions. We challenged each other to write stories where those obsessions were inverted, or satisfied somehow, and to see what came out. In short, I had to write a story about a happy relationship. Ha.

At dawn, Jane comes up from her lab, looks around with smudged eyes, and says, "Smells like a witch's boudoir in here."

Dragan, who, upon waking, had immediately burnt a stick of incense against the lab's gutty stink, taps the ground coffee into the press. "Better than a butcher's back heap," he says.

"Case of the cure being worse," she says.

The sun glints off the pearly laplets in the bay. The sand here is fine as ground china. It'll sugarcoat your ankles.

"I can tell," she says, nuzzling him.

Then she eats a banana and takes his place in their bed until the sky flips onto its back and the light goes apricot, which is when she calls down to him sleepily and he flaps the sheet back to find her hand working and he pushes his bouncing stiff barb into her hot bog and they eat dinner together out on the terrace overlooking the pelicans.

The pelicans are monstrous. A white dozen of them come every year and dine in the river mouth's confluence for a few weeks before flapping off like a flight of pterosaurs.

"You could ride one," she says, brutalizing a raspberry with her fingers as she beckons it from the bottom of the bowl. "Let's capture a baby and tame it."

"Ride it where?" he says. "Is this a dig at my stature?" Standing against her he comes barely to her breasts, although the flaming poof of his hair tickles her nose, and they could be nigh a foot apart yet the tip of his erection would graze her thigh.

"Yes. When you go for groceries," she says. She is tall and slender, with wide doll eyes and finely pointed features and, in certain company, the word Lady before her name. She scrapes her golden hair back tight when she puts on her rubber gloves and white coat, and there are flashes of silver in there, nearly invisible. She has been here nine years and every day Dragan looks for her husband's sky-blue sails on the horizon.

"I'd sew you a sealskin saddle," she says. Then she rises and carries her espresso inside, though as she passes she places her palm on his wildfire crown and massages his skull for a loving second.

Her client for the day arrives after the sun's dropped itself into the sea's puddle, a glowing ruby glaring at the sky. The taxi leaves the man at the foot of the drive, where he fusses with the gate for quite a while before Dragan jabs the button from inside. The client is tall and handsome and blonde. He could be Jane's brother, in a neat seersucker suit. Dragan opens the door, nose at the man's waist. He could be Jane's husband, with those stormy sailor eyes.

Note: These monthly spotlights showcase Mysterious Middle Drafts (MMDs). That means they are somewhere between first drafts and final drafts. This is a challenging stage! Emerging writers bravely share their work-in-progress here for discussion, but this is not a book review or critique: this is a venue for the appreciation of Mysterious Middle Drafts. Thank you for making this writing space safe and supportive.

Please leave a comment below. And thank you, Paige!

By Sarah Selecky
Under Guest Authors
8 min read
Cross training.
What you need to know about fear.
Like

Oh, amazing! I loved this, Paige. It's so mythical and corporeal. And your word choice...there's such sound variation in so many of the sentences - fun for the ear, tongue, and mind. "The sand here is fine as ground china. It’ll sugarcoat your ankles", "until the sky flips onto its back." You've definitely inspired me to put more diversity in my lines. And you don't sacrifice story. I'm off to look up more of your stories.
Read more
Read less
Like
Reply about 8 years ago
Kyla Stack

Brilliant, as always. I love 'hot bog' and the contentment in the relationship is palpable, so you successfully found a happy couple. Mostly, the whole thing made me miss you! Hopefully I'll have an opportunity to read more soon...
Read more
Read less
Like
Reply almost 8 years ago