If your writing strikes you as crappy, you're on the right track.

I met Daniel Griffin in the UBC Creative Writing MFA program, where he was refining his story collection.

He has a knack for clean, careful, patient, sneaks-up-on-you drama, which I love. Update: Since writing this post, Daniel has followed his story collection, Stopping for Strangers, with a new novel, Two Roads Home.

I asked Daniel: if you could advise emerging writers about one important part of the writing process, what would it be?

Read his great advice on revision — especially when you don’t love your first draft — below. 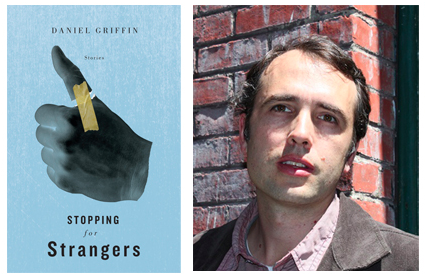 If your writing strikes you as crappy, you're on the right track.

Publishing in literary magazines is a slow business. It can be a year or more after I've finished a story before I see it in print. I remember the day the second story I ever published landed on my doorstep in a copy of The Massachusetts Review. I hadn't read the story in over a year, but the moment I looked at the first page, I knew they'd made a mistake with the opening. The first three sentences were clunky, and I was sure that they weren't the way I'd set them. I booted my computer to figure out exactly what they'd changed, but when I opened the file, it turned out The Massachusetts Review had printed exactly what I'd written.

Like most writers, it's always the problems in my writing that leap out at me. In everything I've written--early draft, late draft, “finished” product--I can quickly find something I'd like to change. Before public readings of my new book Stopping for Strangers, I still go through the story I'm about to read and pencil in changes.

If you've ever looked at your writing and seen nothing but problems, I'm here to tell you it's a good thing: you're on the right track. To be a writer is to be a dissatisfied reader of your own prose. If you write a first draft and think, “Wow, that's great,” the unfortunate truth is that you're wrong. I know your first draft isn't great. I've read enough first drafts that I can promise you this. Worse news: If you can't see the problems in your draft, you can't fix them.

On the other hand, if you print off your story, read it and groan and squirm at all the mistakes realizing it's crap, that's fantastic. Once you can see it's crap, you can start to improve it. If a sentence confuses or annoys you, fix it. You might read it a week later and realize the fixed sentence is still awkward, but that's okay. Fix it again.

To be a writer is to be caught up in the endless spiral of rewriting and revising. I often say I'm not a writer but a rewriter, and that's because every first draft I've ever written has been crap. Second draft too. The good work that has come by the tenth or fifteenth or, God help us, the thirtieth draft, has found its way there through the endless process of seeing what's crap and trying to fix it.

Rewrite and revise until you can read your work without seeing any problems. Remember, for any given problem, the first fix might not work, nor might the second or seventh, but that's okay. As long as you can still see the problems, you're also seeing the answers. When your story is reading smoothly, set it aside, leave it for a month or two. When you come back to it, you'll be approaching it with new eyes. Chances are you'll spot some messy passages. Great news. That's just as it should be, and it's the reason I saw those problems in the opening of my story in The Massachusetts Review. I'm my own most critical reader. It's not a fun job, but somebody's got to do it.

Daniel Griffin is the author of the novel Two Roads Home (Freehand 2017), and a collection of short stories, Stopping for Strangers (Vehicule 2011). He is the father of three children, and lives in Victoria BC where he teaches a course on short story writing at Camosun College’s Continuing Education program.

[...] Fact: Not-good writers don’t look critically at their own work because they don’t have the skills to do that yet. If you are lucky enough to think that your own writing is particularly bad, you’re on the right track. [...]
Read more
Read less
Like
Reply over 10 years ago
Jesse Hill

Thanks, Sarah. This really helped me today. I took a break from my novel to work on my short story and when I went back and re-read my second draft, I was heartbroken. It is total crap. Honestly, I'm still heartbroken. But maybe this means I still have a chance.
Read more
Read less
Like
Reply about 10 years ago
Writer Unboxed » 4 Options for Improving Your Fiction

[...] that’s okay. Canadian author Daniel Griffin says: If you’ve ever looked at your writing and seen nothing but problems, I’m here to tell you [...]
Read more
Read less
Like
Reply about 10 years ago
Faith

Thanks for writing this! I'm in the middle of editing my first novel, and all it's been lately is crappy writing I can hardly stand to look out, which is discouraging. Maybe there's hope for me after all.
Read more
Read less
Like
Reply almost 10 years ago