"Every one of these short fictions is distinct from the other -- sui generis, as all very good stories are. Each one fulfills its destiny..."
— Zsuzsi Gartner 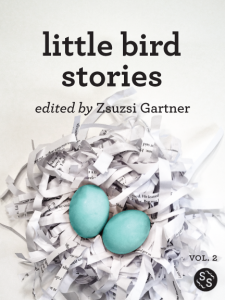 Zsuzsi Gartner writes: "No Street Called Crow is a sophisticated story that contains a lifetime (or rather, lifetimes) in just a few pages... smart, wise, and heart wrenching."

I was delighted to make it so.

"Who Does That?" by Lana Pesch

"Forensic Study of an Apple" by Nikki Vogel

"It Starts Wonderful" by Tom McMillan

"You Scar Me So Blue" by Dorianne Emmerton

About the cover: Michel Vrana is the genius who designed the cover for This Cake Is for the Party. I loved working with him on the cover of my book so much,** I asked him to put something together for Little Bird.

The image on the cover is actually made out of the paper version of these digital stories -- printed and shredded and made into a nest. The eggs, too, are real ones -- one for each year of the anthology, of course. Brilliant.

Make this stunning + supercharged eBook magically appear (i.e.: download it). I donate all of the sales to PIBO, an organization that helps monitor the health and safety of thousands of birds as they migrate through North America. ***

Thank you again to everyone who submitted. You made me very proud. Stay in touch for details about next year's contest.

* Zsuzsi was relieved that the runners-up would be arranged in alphabetical order; having to put them in any order of preference would have been too difficult.

** Michel read the manuscript, called me on the phone to talk about the themes in my stories, and then came up with that broken plate on the iconic robin's-egg blue. He also shopped for the perfect plate, fork, and cake flavour (carrot) before taking the photograph. He's the real thing.

*** PIBO fact: did you know that non-organic blueberry crops are scarily harmful to songbirds? Cranberry crops, too. Pesticides!

By Sarah Selecky
Under Newsworthy
3 min read
The Hunger Games + the surprising truth about clichés.
What will happen if you don't write?
Like