In the Spotlight: Kristyn Dunnion

Every month for the next year, I’m going to feature the work of writer I think you should meet. These are writers who have inspired me in our work together. For lack of a better word, I’ll call these writers students. But I’ll be honest – when it comes to writing and inspiration, the line between teacher and student is a very fine one. I’ve learned a great deal from each of these writers. That’s why I’m introducing them to you.

This is a monthly feature that’s meant to showcase process, technique, and writing philosophy. But the best part is that each month, you’ll get to read and learn about MMDs: those mysterious middle drafts.

Too often, beginning writers think that their early drafts are finished stories. It takes experience to recognize that more work needs to be done. But when do writers get to study a middle draft? Those not quite first drafts, not yet polished drafts – what are they, really? What does an MMD look and feel like? And how does a writer know it’s not finished?

For writers who aren’t in workshops right now, I urge you to read these new voices carefully, as if they were your classmates. They’ve agreed to let you peek behind the scenes and read their works-in-progress – a rare thing indeed.

This month, I’d like you to meet Kristyn Dunnion. I met Kristyn this spring when I was teaching at the Banff Centre for the Arts. Her short story was uncommonly brave, especially the way she handled character. Kristyn’s writing reminded me to have courage, to challenge myself to go raw, and to remember the power of curiosity. 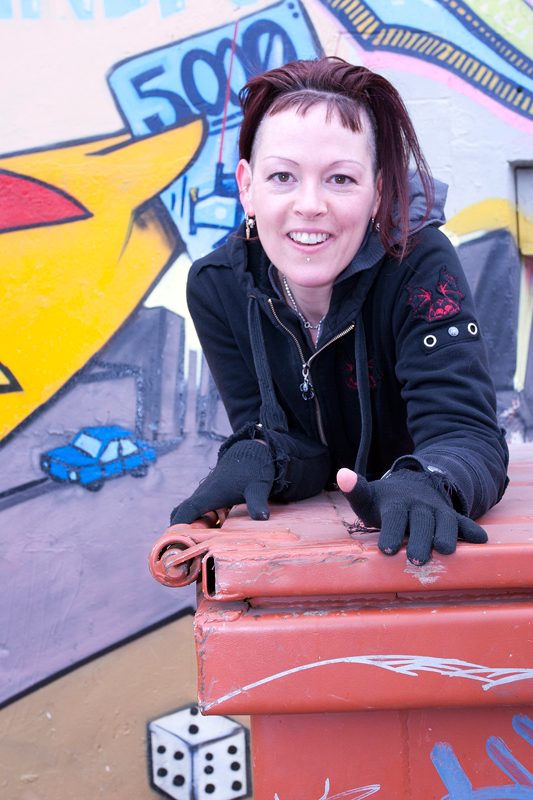 First the hand, then the computer.

I go both ways.

I have always worked full time (unrelated to writing) to pay my bills and have to find time and energy to write during evenings and weekends. I’m not sure what is meant by resistance in this instance. It is everywhere, internal and external.  I know the world at large doesn’t care if I ever write another sentence, if I ever write another story. But I do. This form of storytelling completes me, so writing becomes a necessity. I just push through and do it.

Who are you reading these days for influence, and why?

I am reading Daniel Woodrell and particularly loving The Outlaw Album.  His subject matter is often ruthless, sometimes vile, always rugged. But his sentences and dialogue are pure joy to read. I love the way he plays with language. His characterization is brilliant, humane. As a reader, he brings you places you never wanted to go but leaves you somehow glad for the experience.

Try to do anything else at all. Seriously. If you still feel the obsessive need to write, then commit to the craft like a marriage.

Tell us about the story excerpt you're sharing today.

Gone To Ground is an early draft of a story under development.  Ryder is a young woman living in an underground bunker with her extended family, members of a religious cult. One challenge in this piece is I’m exploring a first person narrator whose beliefs I personally oppose. Stylistically, I’m playing with language and allowing myself to create a contained sub-world verging on science fiction, in order to examine social issues that matter to me.

Excerpt from Gone to Ground, by Kristyn Dunnion

Government said the Earth was dying, but Government’s a dim-witted Democrat, so what.  Big bang, global warming, Nazi Holocaust.  All lies.

We what known better went underground, biding our time while those whiners and liars and heretics fight it out.  Holed up like tortoise in the shell, belly deep in mud, we wait while topside the storm wages.  Youngers don’t know tortoise, never seen such a thing, but Father Ernst charades with the half-barrel on his back to make the point come alive during Reflections on the Doctrine, which he teaches in the Great Hall each day.

Father Ernst’s white eyebrows push together in vexation.  Silence, he says, and the twelve youngers stop their tomfoolery and crouch, breathless.  He says, Tortoise hides. But when all’s quiet he reveals himself in his true glory, as shall we.

Father Ernst looks to the gusting air vent above. He tilts his head – he’s listening to his Spirit voice, the holy incarnation that speaks through him to guide us.  Father Ernst nods, joy floods his face.  His voice fills the shadowy hall and echoes off the bunker walls:  Never question that we are the Chosen tribe.  We shall have dominion over the Earth!

Youngers chant and clap until fine dust shimmies through the air from joints in the support beams above, and their reddening faces shine, and veins stick out on their small necks from the effort.  Chanting warms their damp skin, pumps their blood, takes their minds off their twelve empty bellies and the endless bleak hours below.

I lean on the cement wall with the six remaining cousins, behind the line of writhing youngers.  I’ve been bunkered since I was nine, have grown, gotten tit bumps and even had the blood drop once or twice, though I can’t say for sure what age that makes me.  Even so, hearing Father Ernst teach the Doctrine still puts a shine on.

Youngers reflect on their lesson, righteous Hannah with the pinchy lips looks to Father Ernst’s earthly needs, and the rest of us cousins patrol the shadowy tunnels, check water levels in the cistern and empty rattraps so cousin mothers, thin and silent, can prepare our nightly meal.  Cousin brother Paul walks beside me, so close his body heat warms my bare arms, his musk fills my nose.  I peek at the pale boy I’ve known all my life.  Paul is tall of late, his voice lower.  Paul’s stealthy fingers tickle the skin on my ribs.  A laugh barks out of me before I notice the polished curve of his Scout boots, what means he is to go to ground.

Father Ernst been sending you topside something frequent.

Signs and portents, he says, and looks away quick.

Mostly my chest burns prideful, but today the thought of him shimmying up fifty metres of ladder pole, climbing the hidden air vent bunker exit and creeping about the war-torn rubble fills me with dread.  He could happen upon a Government mine.  Or get sharp-shooted off his own feet by Special Forces, or sickened to wasting by viruses that propagate in the swamp.  Even worse, what if one of them ungodly apostates bewitches him?

What remains with you after reading Kristyn's work?

Can you articulate what's working in this excerpt - and more importantly, why it's working?

How is your own writing practice like Kristyn's? How is it different?

And thank you, Kristyn!

By Sarah Selecky
Under Guest Authors
7 min read
How to end a short story: a case study.
Should you get an MFA?
Like

Wow. Pure poetry. I loved the wordplay, the unexpected combination of words, the creation of them, the way the tone comes through them. The economy of the prose is excellent, too, and also marries well with the voice of the character. What remains with me is already an image of this underground world, mystery, curiosity, but mainly the writing style. I appreciate it very much. The first few paragraphs in particular of this story really set the tone, voice, and poetry of the prose well. The voice is an interesting blend of classical but also something like Cockney, and I can imagine this would be somewhat difficult to make consistent throughout seeing as it's so different. But when a character gets inside your head properly, I guess it's easier. I'm sure Kristyn will have no trouble. My own writing practice is the same but to a lesser extent. I too work full-time on something other than writing, but find the time not only to actually write or revise but daydream and develop in my head. This is new for me, and pivotal.
Read more
Read less
Like
Reply over 10 years ago
Carrie

What remains with me is the very distinct voice in this piece. "So what" and "we what known better..." these lines are spoken with such a naive stubbornness, that it sets the tone for the whole story. So well done. I love the pull of adolescence on this child, for the main character seems more child than adult, and the implicit danger, both for this character and the world around her. The images are so vivid. I hope to see more of this story! I love Kristyn's comment about committing to the craft of writing like a marriage. So refreshing.
Read more
Read less
Like
Reply over 10 years ago
Mary Nicholson

You know, it has been a couple of days since I read the Kristyn's excerpt, and it has stayed with me, and I am waiting to read what happens next! I think what really worked for me in this passage is that the language was so unique, that I had to slow down, repeat phrases, and try to figure out what was happening. The effect was, I couldn't skim the passage, and it drew me in. Very different then my own writing, as I am new to fiction, and have been "writing what I know." Fascinating to read this, as I am assuming it is quite a departure from the author's experience. Thanks for sharing.
Read more
Read less
Like
Reply over 10 years ago
Mary Nicholson

*not "the" Kristyn's excerpt. Yeesh. I am also inventing my own grammar rules as I go along...
Read more
Read less
Like
Reply over 10 years ago
Lana Pesch

What stays with me after this read is the cold, dark, spareness of this underground bunker. Also spooky Father Ernst, creepy bugger. It brought to mind film images of Jesus Camp, Children of the Corn, The Walking Dead as well as echoes of Catholicism and residential schools. I wonder if there are influences? What's working? Kristyn's "playing with language and allowing myself to create a contained sub-world verging on science fiction, in order to examine social issues that matter to me." This is working. The proper names of things has a real impact: Government, Democrat, the Chosen, the Doctrine. It's feels formal. I get the sense there is more to discover and explore and reveal in this sub-world. Great idea to address social issues in this way. Kristyn wrote: "I know the world at large doesn’t care if I ever write another sentence, if I ever write another story. But I do." Yeah, me too.
Read more
Read less
Like
Reply over 10 years ago
Gabriele Kohlmeyer

What stays with me: the setting! the voice! Wow, what a strong voice that is. This world exists, I've got no doubt about it, just utterly convincing! Why it's working: one of the, more obvious reasons: the voice is consistent, the register, the tone, the colloquialism, it just fits. "I’ve been bunkered since I was nine, have grown, gotten tit bumps and even had the blood drop once or twice, though I can’t say for sure what age that makes me. " What a sentence that is! And representative of the story in its immediacy, that girl's raw, rough and vulnerable voice.
Read more
Read less
Like
Reply over 10 years ago